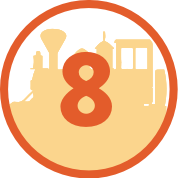 Joining of a Nation

While the Gold Rush changed the face of the West, no single force had a larger hand in this than the Transcontinental Railroad. It transformed everything in its path, creating new boom towns, and destroying others.

Before the railroad, it could cost up to $1000 at the time to travel across the country (about $30K in today’s dollars). After its completion, this price dropped to $150. As you can imagine, this encouraged even more people to make the trek. It also caused controversy as it put companies like stagecoaches out of business, along with the upheaval of whole towns. The custom-built roundhouses at this hole were inspired by the actual one that terminated here in Mission Bay, where the railroad met the Pacific.